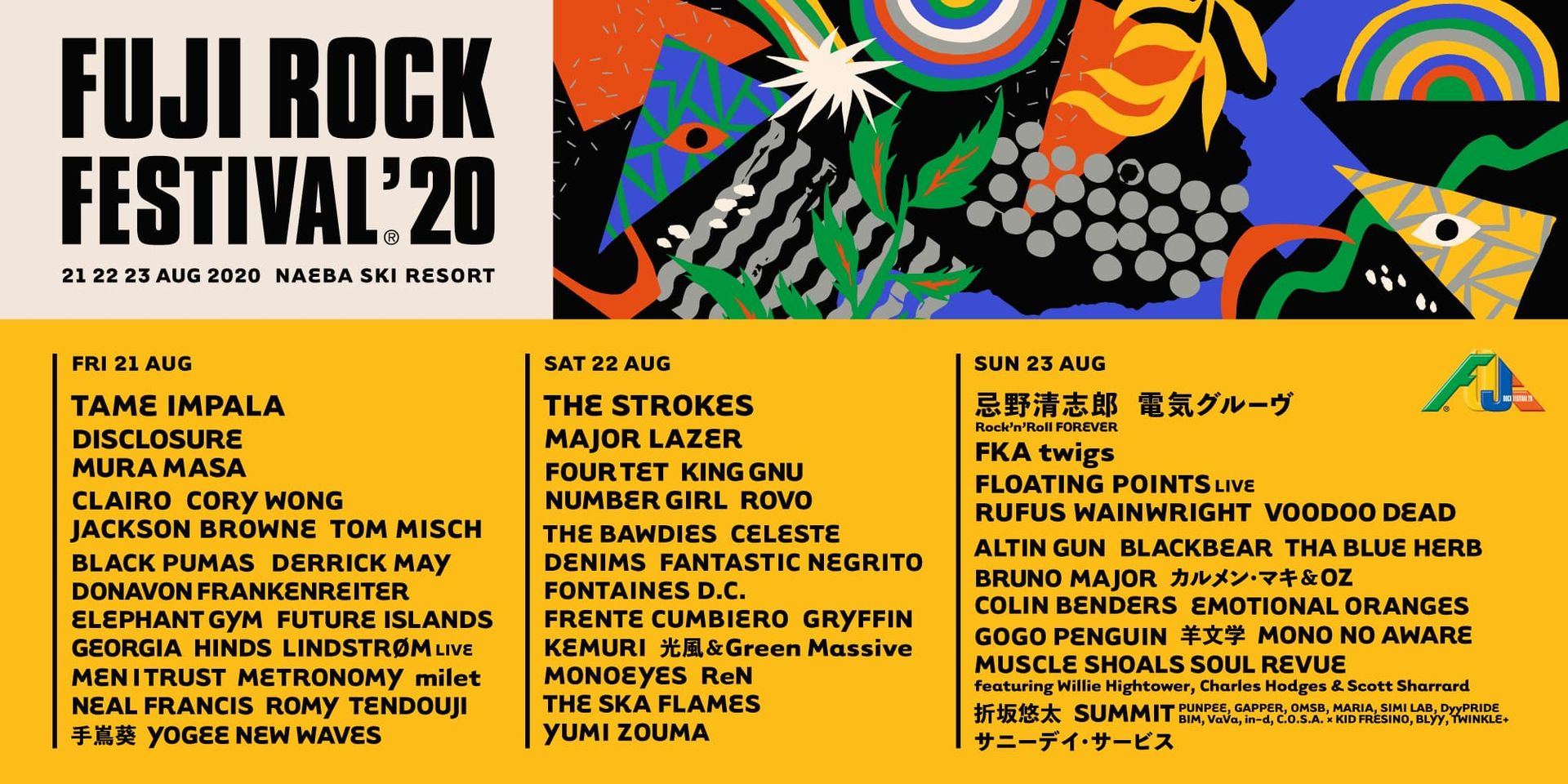 Held for the first time in the summer of 1997 amidst the sprawling nature at the foot of Mount Fuji with "symbiosis of nature and music" as its theme, Fuji Rock Festival is one of the largest outdoor music festivals in Japan.

However, the first year was hit by a large typhoon forcing the cancellation of the second day. Rather than a "symbiosis", the organizers and festival goers both yielded to the fury of nature and the inaugural year of the festival proved to be full of challenges. After being held in Tokyo at Toyosu in 1998, the festival made its move back to the ideal of a location surrounded by nature - its current home - Naeba Ski Resort in Niigata prefecture.

Having learned valuable lessons the first year, and through years of trial and error, Fuji Rock evolved, along with the passionate participants who were always ready to help make the festival a success, to become the first ever authentic rock festival in Japan. Through this process, the festival is not only more prepared for inclement weather, but has developed to include many other attractions, food stands and NGO booths. The festival has built a relationship of trust with the area surrounding the festival, growing to become a renowned summer tradition.

●Cross Type Folding Outdoor Camping Chairs
These types of folding chairs have been deemed dangerous as people carry them without folding and are a danger to others.
● Umbrellas
The use of umbrellas is prohibited in all areas of the festival including camp sites. They are a danger to other festival goers in low visibility and can be blown away in high winds cauzing a hazard.
● Leisure sheets, parasols, and other items that block visibility or take large amounts of space.
《Items which are prohibited》
・ Blue sheeting or leisure sheets which take up more room then being used by the number of people.
・ The use of tenting (outside of the camp site areas), parasols, sun shades, etc., and any other items that block the view of others is prohibited.
These items cause congestion and are difficult to transport which means people tend to discard them becoming a hazard to others. (The saving of space is prohibited throughout the festival.)
● Sheeting, chairs, tents and other camp items which cannot be taken back with you.
● Any and all sound recording devices.
● Bottles and cans (carrying in coolers also prohibited)
● Fireworks and other explosives.
Any and all pets, items prohibited by law and any other dangerous items are prohibited at the festival.
Those who bring prohibited items into the festival will be asked to remove them from the premises.
Please note that those who do not follow directions of festival staff will be ejected from the festival. Tickets will not be refunded in this case.

【ACTIONS PROHIBITED AT THE FESTIVAL】

● Smoking while walking, smoking in congested areas, smoking in non-smoking areas
《Non-Smoking Areas》
Areas directly in front of the stages / in front of the PA, lighting booths at each stage / Kids Land / entire Red Marquee area (including outside of the tent) / Blue Galaxy / Orange Cafe / Crystal Palace Tent / Stoned Circle / Cafe de Paris / Priority Tents
● Actions which harm others
Moshing, diving and other dangerous behaviour including transporting folding chairs without folding them up or otherwise transporting luggage in congested areas.
● Leaving trash behind
Garbage should always be sorted and disposed of in the proper receptacle. The festival is held in a area surrounded by lush nature and volunteers commit their time to sorting and recycling the garbage at the festival. The garbage recycled at the festival is used as toilet paper and garbage bags at the festival the next year.
● Leaving chairs or sheeting to save space.
Items left unattended for prolonged periods of time will be disposed of. Saving large areas of space using sheeting or luggage is prohibited.
Sheeting being left to save space and hindering others from entering the area has increased in recent years. Please be sure to carry items such as sheeting or chairs with you at all times in order to allow others the chance to rest or use the space. (This applies to the Priority Rest Tents. Please be sure to take your belongings with you when departing an area.)
● Use of chairs or sheeting in prohibited areas
《Prohibited Areas》
・ Entire RED MARQUEE area (including outside of the tent).
・ Directly in front of the stages and in front of the PA, sound booth at each stage.
・ Be sure to follow the instructions of festival staff if told not to use sheeting or chairs in areas other than those listed above.
● Prolonged use of and/or leaving belongings behind in Priority Rest Tents as well as use of facilities by those who are not appropriate.
The Priority Rest Tent is a temporary rest tent for the use of the following.
Those who are not one of the below should not use the tent. Please also keep use of the tent to 1 hour or less.
（Those with a Physical Disability Booklet may use the tent throughout the day.）
・Persons with physical disability and attendants.
・Pregnant women and attendants.
・Small children and attendants.
* Attendants are limited to one person.
See FAQ for more details on use of Priority Rest Tent
>> FAQ https://www.fujirockfestival.com/guide/faq

Fuji Rock Festival Rules & Regulations
・ These rules and regulations are subject to change without notice. Please note that ticket refunds will not be made for such rule changes regardless of how prior notification is made or lack thereof.
・ The festival will not be cancelled due to inclement weather (excluding natural disasters). Please note that ticket refunds will not be made due to changes or cancellations of artists.
・ The festival is held at a natural outdoor venue. Please be sure to watch after yourself and guard against injury from falling, hypothermia from low temperatures, bites or stings from bugs such as bees, gnats, flees and or rashes or allergic reactions from plants and animals.
・ Please avoid excessive drinking. Those deemed to be drinking excessively or out of control may be ejected from the festival site.
・ Any dangerous behavior that may harm other people, such as moshing and diving, is prohibited. The festival is not responsible for injuries and accidents due to such acts. Such incidents shall to be solved between the parties involved.
・ Persons found to have entered the festival illegally will be reported to the police and will be put under the care of local police officials and charged for compensation.
・ Please refrain from any behavior that can cause annoyance to local residents.
・ Due to local regulations, people under 18 years must return to their accommodation by 11pm.
・ The final train departing Echigo-Yuzawa Station leaves before the festival performance finishes. All public transportation is unavailable after the last performances on all days of the festival.
・ Be sure to acquire transportation and/or lodging yourself before coming to the festival. (Sleeping outdoors at, around, or near the festival or Echigo-Yuzawa Station is strictly prohibited. Also, those who have not acquired a parking pass in advance are prohibited from parking at the festival.) Please also note that parking passes and lodging packages available at the on-site festival tour center are limited.
・ Those who bring prohibited items into the festival will be asked to remove them from the premises.
・ The production, the site and the artists are not responsible for accidents and thefts in and out of the festival site.
・ Those who do not follow the directions of festival staff or cause harm to other festival goers will be forcibly ejected from the festival. If the actions are deemed malicious by the festival, the person will be banned from entering the festival in future years regardless of whether they purchase a ticket. Ticket(s) will not be refunded to those persons under any circumstances.
・ You may bring cameras and/or video cameras into the site but it is strictly prohibited to record the artists. No sound recording equipment is allowed on the site. The use of selfie sticks are not permitted in congested areas, in front of the stages, and while moving between areas.
・ Agreement to the festival rules and restrictions is needed to purchase tickets. Please be sure to read and confirm all rules and regulations listed on the official website before purchasing tickets. Please note that purchase of festival tickets shall be deemed as agreement to all rules and regulations of the festival.
・ All information given when purchasing festival tickets will be held by the festival organizers. 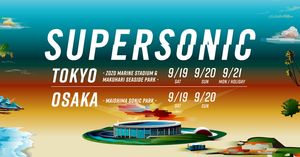 The first large festival in early autumn “SUPER SONIC” is launched after the 2020 summer vacation. Tokyo basically has 3 stages only in the outdoor area. ZOZO Marine Stadium will be a main stage of the marine stage, Sonic Stage with a capacity of...